Paryphanta busbyi is a species of large predatory land snail, a terrestrial pulmonate gastropod mollusk in the family Rhytididae.

The type locality is New Zealand. The type specimen is stored in Natural History Museum, London. The shell is large, broadly umbilicated, depressed and subdiscoidal. The shell is opaque and shining. The colour is deep green, usually with some radial streaks of blackish-green.

The shell of Paryphanta busbyi has very thick periostracum and only few micrometre thick calcium layer. When the shell is kept in dry environment, the shell will explode into pieces, because its periostracum shrinks.

These large snails live in litter, among plants on the ground and under logs in kauri forests and in shrubland. In some areas they have been reported to at times frequent underground habitats including burrowing deep into soft soil. They are also found in shrublands with non-native species like Hedychium and in forests with non-native plants including plantations of Pinus radiata.

Paryphanta busbyi is often observed to be active when the weather is cool and wet. The activity is most strongly correlated with higher humidity and still air which may assist the snails to track their prey. The snails will then retreat into lairs during the day when lairs are available. In dry weather it is inactive.

Paryphanta busbyi is carnivorous and predatory, feeding on earthworms, insects, insect larvae, snails of the genus Rhytida and on its own species (cannibalism). This snail sometimes lives in trees, very likely in clusters of semiparasitic plants, where it may find its natural food, earthworms.

Predators of Paryphanta busbyi include rats, pigs, possums, hedgehogs and birds. Rats and birds eat the juvenile snails. Pigs eat these snails at all sizes including the eggs, and pigs also destroy the snail’s habitat. Paryphanta spp. was listed in appendix II of CITES and it was removed, because collection is not a significant factor of this species (and the genus) decline. 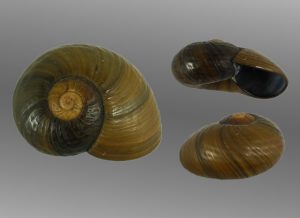 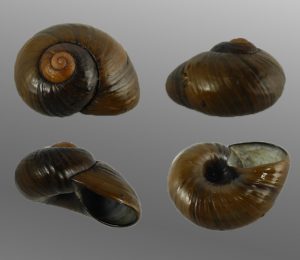