As its name suggests, the “Tuberculate Gyre Triton” is a small ranellid whose shell is characterised by numerous dark-coloured tubercles or beads distributed across the shell surface, as well as strong varices occuring every 180 degrees. A generally little-varied and easily recognisable species except the size of tubercles and spiral colour bands which vary somewhat in size.

Although mainly a carnivorous and predatory gastropod feeding on bivalves, polychaete worms, and other invertebrate animals, it has also been reported to feed on algae. It possesses an acid gland with which it can excrete sulfuric acid to dissolve calcium carbonate shells of prey animals, especially bivalves, but it appears to only carry out this energetically costly method of predation when other easier prey (such as worms or hydroids) is not available.

Like many ranellids it has a very wide distribution in the Indo-West Pacific region ranging from central Japan to Indonesia to Mozambique, thanks to the very long dispersal ranges of its planktotrophic larvae. A common species across its range, it inhabits hard bottoms of shallow water ranging from the intertidal down to about 40m deep. Typical shell length around 30mm, very large specimens may exceed 45mm. – From Chong Chen’s post 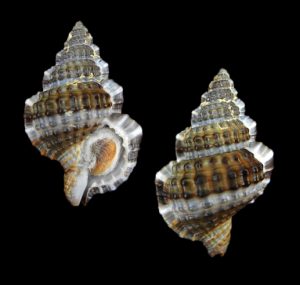 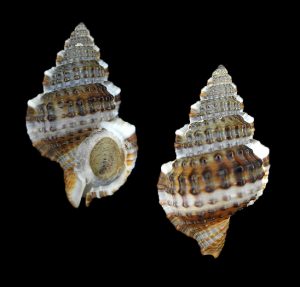 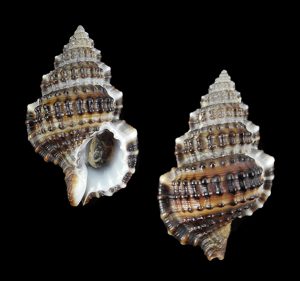