The “Glory-of-the-Sea” is certainly the greatest historical rarity of all molluscs throughout the history of shell collecting. This distinguished cone with beautiful tent patterns was the most desirable and an exceptionally rare shell of for about two hundred years since the first specimen arrived in the western world as early as 1757.

S. Peter Dance, who selected it as one of four greatest rarities in “Shell Collecting: An Illustrated History” (1966) and one of his 50 “Rare Shells” (1969), wrote: “some rare shells are well known; a few are famous; one, and one only, has become legendary”; “to see one was a priviledge, to hold one an honour, to own one a triumph”.

The handful of early specimens were all unlocalised but its true provenance was revealed by Hugh Cuming when he discovered two in the Philippines in 1836, but none were found after his visit and many considered it extinct; until 1957 when a living population was re-discovered once again in the Philippines. By 1960s many more had turned up from western Pacific and today it is only somewhat uncommon, many being brought up by deep-water tangle nets in the Philippines. Its distribution range is now known to be rather wide, ranging from the Philippines to Indonesia to Fiji to Samoa.

Although it is found across a wide bathymetric range, -10~300m, most specimens are obtained from depths greater than -100m which certainly contributed to its initial scarcity. A predatory gastropod capable of injecting toxin using a dart-like radula like other conids, it inhabits sandy to muddy bottoms and is molluscivorous.

The pattern is very variable and the shell is rather prone to growth lines. Specimens showing strong blue hues are known as well as a golden form. Typical shell length around 100mm, extremely large specimens may exceed even 170mm.

Although much of its illustrous rarity has faded through the re-discovery, its fame and glory shall not; and it will always remain a must in any serious collection for as long as the history of shell collecting continues. – Description adapted from Chong Chen 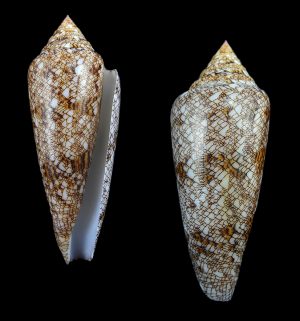 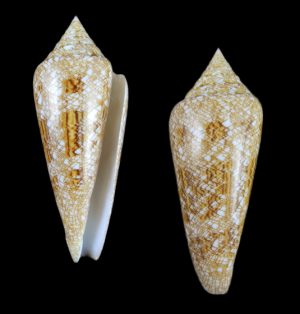