The boring clam is the smallest clam in the subfamily Tridacninae and grows to a maximum shell size of 15 cm (6 in). It has two, thick valves joined together by a hinge which is typically between a third and less than a half of the width of the shell.

Typically shells are slightly to moderately elongate, and the animal is strongly inflated, especially near the hinge. The upper valve has six to ten flattish folds which interlock at the margin with similar folds on the lower valve so that they can clamp together and the shell can close tightly. The lower valve has slits through which the byssal threads emerge which secure the animal to the seabed.

This clam burrows into the substrate and this process tends to wear away the outer surface of the valves and smooth them off. They also may become distorted by burrowing into substrates of uneven hardness.

The boring clam is native to the Indo-Pacific. Its range extends from Malaysia, Vietnam and Japan to Indonesia, the Philippines, Palau, New Guinea, Australia, the Solomon Islands and Vanuatu. At one time it was known from Guam and the Northern Mariana Islands but it may now be locally extinct in these locations. Its typical habitat is embedded in massive corals. 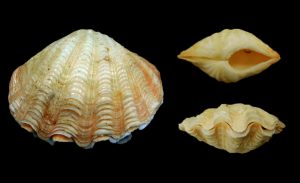