The scientific name is derived from the Celtic settlement Vindobona, now known as Vienna, the capital of Austria. This species was assigned to the genus Cepaea for a long time. However, molecular biologist research showed, that it is not closely related to Cepaea, but belongs in fact to the genus Caucasotachea.

The right-coiled, globular shell of C. vindobonensis is about 17–21 mm high and 20–25 mm broad with 5,5-6 whorls. The umbilicus is completely covered in adult specimens. The lip is always red-brown at the inner and outer side with a fine white stripe at its margin. This specific lip coloration allows to separate it from the conchological similar Cepaea hortensis (pure white lip) and Cepaea nemoralis (consistent dark brown lip), with which C. vindobonensis often co-occurs.

The shell is whitish or yellowish, with about 5 brown stripes, the upper two are usually weak. The lowermost stripe is quite near to the covered umbilicus. There is a slight variation of shell colour within this species (see below). The animal itself is yellowish with grey tentacles.

C. vindobonensis becomes mature after its second year, and can reach a maximum life span of about 7 years. The reproductive period in Greece lasts from April to June, with a maximum in May. About 29-67 eggs are laid, having a diameter about 3 mm, and the juveniles hatch out after 18 days.

During hot summer days, these snails rest attached to leaves or the stems of tall plants. Hibernation commences at the end of October to the beginning of November, and the snails come out of hibernation in March. 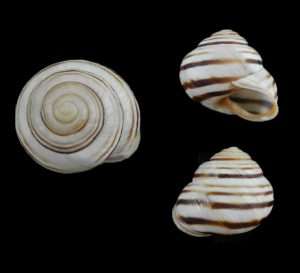