The “Entangled Volute” is a delightful volute characterised by stunning golden axial lines, and is a much sought-after rarity among the volutes. The original description was based on three poor beached shells from Australian fishermen, but with no further specimens being found its true provenance remained a mystery. That is, until its re-discovery in the late 1970s by Mr. Tom Nielson of Yeppoon, Queensland, Australia and his team.

Nielson had already re-discovered other rare shells, including another rare volute Cymbiola thatcheri (McCoy, 1868), using special shell dredges in the early 1970s on-board the chartered boat “Coralita”. His early searches for C. perplicata funded by Mr. John du Pont had ended in no avail, however; and it was only after repeated cruises (also on-board the “Coralita”) that he finally managed to locate and collect live specimens of C. perplicata in the Coral Sea. His early expeditions were supposedly recorded in a film entitled “In Search of the Perplicata”, though virtually no remaining copies of it appear to exist.

Today it is known to be an endemic of the Australian Coral Sea, and remains rather scarce still. A carnivorous gastropod like all volutes, it inhabits sandy bottoms of shallow to moderate depths around -2~40m. Typical shell length around 65mm, extremely large specimens may reach 85mm. – From Chong Chen’s post 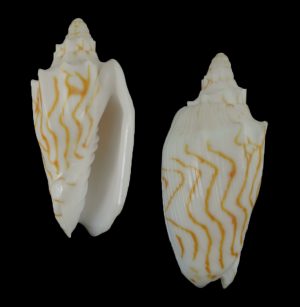