Chicomurex gloriosus is a medium-sized Chicomurex ranging widely across the Indo-West Pacific region ranging from Reunion and Mauritius to Indonesia to Philippines to Japan to Papua New Guinea.

It has been considered a junior synonym of C. venustulus (Rehder & Wilson, 1975) and confused with that species for a long time but recently after careful comparison with C. venustulus from the Marquesas, its type locality, a number of consistent and reliable features was found to differentiate them (Houart Moe & Chen, 2015). These include C. gloriosus being much larger, not as stocky, and has longer siphonal canal as well as higher intervarical nodes.

Furthermore, C. gloriosus is much less scabrous and the two differ in positions of the coloured spiral bands when they are present. Houart Moe & Chen (2015) reinstated the name C. gloriosus, and the true C. veustulus is now considered to be endemic to the Marquesas. 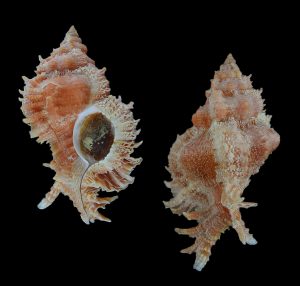