Its outer surface is smooth and almost totally covered by the mantle in life, making encrustations of other animals (such as barnacles) quite uncommon in comparison to other abalones.

This is an Indo-West Pacific species (Eastern Indian Ocean to the Central Pacific). It is common in the Andaman Islands and Nicobar Islands, Pacific islands, southern Japan and Australia (Northern Territory, Queensland, Western Australia). This abalone dwells in shallow water coral reef areas of the intertidal and sublittoral zones, commonly reaching a depth around 10 m.

Though this species is quite abundant, aggregates of H. asinina are considered to be uncommon. These large animals are nocturnal. They graze amongst turf algae and inhabit the undersides of boulders and coral bommies. everal major transitions in shell pattern and morphology can be observed during the life of Haliotis asinina.

The species has a pelagobenthic life cycle that includes a minimal period of three to four days in the plankton. Biomineralisation begins shortly after hatching, with the fabrication of the larval shell (protoconch) over about a 10-hour period.

The initial differentiation of biomineralising cells is likely to include a localised thickening of the dorsal ectoderm followed by an invagination of cells to form the shell gland. The shell gland then evaginates to form the shell field which expands through mitotic divisions to direct the precipitation of calcium carbonate (CaCO3) via the secretion of organic molecules. In this way the larval shell (protoconch) is formed. The construction of the haliotid protoconch is complete following torsion. These structures allow the veliger larva to completely retract into a protective environment and rapidly fall out of the water column.

The transition from protoconch to teleoconch (juvenile/adult shell) is clearly visible at metamorphosis, and suggests the action of a different biomineralising secretome. The early postlarval shell is more robust and opaque than the larval shell but has no pigmentation. While the initial teloconch is not pigmented, it is textured and opaque such that postlarval shell growth is easily discerned from the larval shell.

The juvenile Haliotis asinina teloconch rapidly develops a uniform maroon colouration several weeks after metamorphosis, similar to the crustose coralline algae (CCA) that the larva has settled upon. At about 1 mm in size, further changes in the morphogenetic program of the mantle are reflected in the shell. Structurally, a pronounced series of ridges and valleys and a line of respiratory pores (tremata) have appeared.

Furthermore, it is at this stage of development that the first recognisable tablets of nacre can be detected. Colourmetrically, the uniform maroon background is now interrupted by oscillations of a pale cream colour, and is punctuated by a pattern of dots (that only occur on ridges) which are blue when overlying a maroon field and orange when overlying a cream field.

This shell pattern may enhance the juvenile’s ability to camouflage on the heterogeneous background of the CCA they inhabit at this stage of development. This pattern is gradually lost with growth, as the shell becomes thicker and more elongate. At 10 to 15 mm, this ornate colouration pattern begins to fade, with maroon and cream fields apparently blending to give a brown background. Blue and orange dots however persist on the ridges.

With further growth, the ridge-valley structure fades to give rise to a smooth adult shell, with irregular brown-green triangles on a light brown background. These large scale morphological changes are accompanied by mineralogical and crystallographic changes. Well defined tablets of nacre are present in shells larger than approximately 5 mm which are absent or poorly resolved in shells 1 mm or less. In larger shells, a ventral cap of CaCO3 that underlies the tablets of aragonitic nacre continues to thicken. 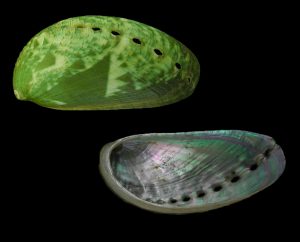