Perhaps the most prestigious rarity among the Atlantic conids, it is not difficult to understand how the “Glory-of-the-Atlantic Cone” earned its vernacular name, given its exceptional beauty.

Compared to the other three “glory-of” cones (“Glory-of-the-Sea” Conus gloriamaris Chemnitz, 1777, “Glory-of-India” Conus milneedwardsi Jousseaume, 1894, and “Glory-of-Bengal” Conus bengalensis (Okutani, 1968)) which are all large conids exceeding 100mm in shell length, from Indo-West Pacific, and have triangular “tent” patterns, it is quite different in terms of size, pattern, and provenance and appears to be the odd one out. However, one should remember that in fact it is the first species out of the four to be formally described.

Despite being widely distributed in and around the Caribbean Sea, ranging from southeast Florida to northern South America, it remains rare across its range even today. A predatory and vermivorous gastropod, it inhabits sand and rubble bottoms of coral reefs from very shallow waters up to 30m deep.

It is surprisingly variable in terms of sculpture, with some specimens (including the lectotype) showing very strong spiral ridges and others being almost completely smooth (which was given the name Atlanticonus espinosai Sarasua, 1977, currently considered a mere form). The height-to-width ratio is also rather variable. It almost always carry a bright and pleasing colouration, however, and the early whorls are usually yellow in all forms. Typical shell length around 35mm, but extremely large specimens occasionally exceed 60mm. – Adapted from Chong Chen’s facebook post 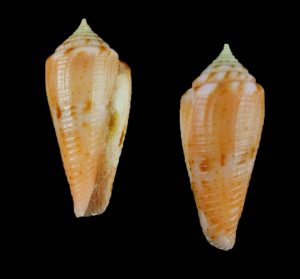